On why one might need to pacify the unreasonable

Over the last few months, I have changed the way how I reach my place of work with respect to the path I take, almost independent of vehicular pollution.

On a daily basis, I cross a house which has a pet dog. By its appearance, the dog looks ferocious. Furthermore, it barks and becomes violent on seeing me. 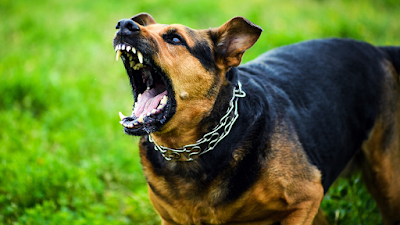 I remember that I used to become really angry and grit my teeth whenever the dog barked. Sometimes, I would turn and show my teeth with an angry face  to the dog, and it would bark more and become even more violent. Perhaps, if there were no social media, and there weren't many people ready with mobile phones with HD cameras, I might have thrown stones or sticks at the dog.

Five or six days ago, I did not show anger or my teeth. Instead I made "pchh, pchh" sounds with my mouth. Surprisingly, the dog became confused and eventually stopped barking! For the last five days, the dogs hasn't even paid attention to me, even if it looks at me.

My anger regarding the matter has come down, obviously. It also dawned on me that the dog's barking was indeed unreasonable, in my perspective, and the language of pacification was also in my perspective.

Suppose one were to translate this learning to the society of men. There are several unreasonable and irrational beings amongst us humans too. Do pacification techniques work on them? What is this in DNA terms? Dog genes?